I love peanut butter… I could exist on peanut butter alone… I eat a jar a week (sometimes more, let’s be real).

Around the holidays every year, I love to make chocolate covered peanut butter balls. I posted the secret family recipe last year. However, they contain a fair amount of butter and milk chocolate… so I revamped it and made it vegan! I gave some to Mark and my coworkers… (they didn’t even know they were vegan… win.)

1/2 cup of Earth Balance buttery spread, or other vegan butter
8 oz or about 2 cups of powdered sugar
1 cups of graham cracker crumbs (gf if need be, Nabisco Original Graham Crackers are Vegan)
6 oz of chunky peanut butter (scant 3/4 cup)
vegan chocolate chips (I used a little less than one 9 oz bag of Sunspire Bittersweet)
1/4 block of paraffin wax (in baking aisle, fret not it’s fine to eat, in small quantities)

Mix the first 3 ingredients together then add in the graham crackers and peanut butter and mix until combined completely. Form into 1 inch balls with your hands. Line a cookie sheet with wax paper. Take a small sauce pot and fill it with an inch or 2 of water. Bring water to a gentle simmer, not boiling. In a microwave-safe, heat proof bowl, microwave the wax so it melts, add in the chocolate chips. Place the bowl over the simmering pot of water, it should rest on the rim of the pot without touching the water below, otherwise you’ll scald the chocolate. The steam form the water will melt the chocolate without scalding it. Stir the chocolate until it is smooth and melted. Dip each ball in the chocolate, coating it evenly, remove it with a slotted spoon to let the excess chocolate drip off. Place the coated peanut butter ball on the waxed paper. Once all the balls are covered, place in fridge for a couple of hours so the chocolate coating can harden.

Spaghetti and Meatballs… a classic. When I was a kid, this was one of my favorites. Before I converted to vegetarianism as a defiant 11 year old, I was all about Sunday Night Spaghetti and Turkey Meatballs. The smells of a simmering pot of sauce gently cooking little orbs of deliciousness are deeply ingrained in my mind. So last Sunday, when I asked Mark if he wanted spaghetti and meatballs for dinner he looked at me with disbelief. I can count on one hand the number of times I’ve made him spaghetti and meatballs in the past 4 years. Since I no longer eat meat, I go lighter on the pasta and I’m lactose intolerant, this recipe differs from that of my childhood. The spinach balls sit atop spaghetti squash, a vegetable Mark and I have been obsessed with for the last 6 months.

Top those squash noodles with some balls of spinach and I’m in vegetable heaven! The “meat” balls are made of spinach, a bit of bread crumbs (gf if need be), quinoa, a binder (egg or flax egg,) onions, garlic and spices… you won’t even miss the meat. But because I’m a nice girlfriend I made Mark some pork and turkey meatballs.

1 12 oz package of frozen spinach, defrosted and all excess water squeezed out with an old kitchen towel

1 egg or flax egg (1 tablespoon of ground flax seed mixed with 2 tablespoons of water and allowed to sit in the fridge for 15 minutes.)

1/4 cup of cooked quinoa (from above)

1 cup of your favorite tomato sauce

1 spaghetti squash, cut in half lengthwise

Start by cooking the quinoa. Add the oil to the bottom of a small pot. Let it heat up for a minute over medium high heat then add in the quinoa and water, stir and bring to a boil. Turn the heat down, put a lid on the pot and let simmer for 15-20 minutes or until all of the water is absorbed, stirring occasionally.

While the quinoa is cooking, start to prepare the spinach balls…take a medium sized bowl and add in the spinach, bread crumbs, egg, spices, garlic and onion. When the quinoa is cooked add 1/4 cup to the spinach mixture, and stir it to combine all of the ingredients. Heat a mediums size pan over medium heat and add in about a tablespoon of olive oil. This is also a good time to preheat your oven to 375 F for your squash.

Form the spinach mixture into 10-12 balls with your hands. Place the spinach balls in the pan and brown on all sides. Once nicely browned, add in the sauce and water and cover the pan with a lid, let it simmer gently for at least 45 minutes, but I think the longer the better. Stir it around occasionally

While the spinach balls are bubbling away, line a cookie sheet with foil and spray with cooking spray. Place the spaghetti squash, cut side down on the cookie sheet and bake for 45 minutes to an hour. The squash is ready when the flesh can easily be pierced with a fork. When it is done let it cool a little bit, then scrape a fork along the inside, from stem to stern. The squash should come apart in strings that resemble spaghetti (hence the name). Plate up your squash and top with spinach balls and sauce.

Sometimes around the holidays, with the parties, the cookies, the excess alcohol, and the comfort foods, you start to feel like you need a reboot. I’m at that point… gimme a plate of kale and a large glass of lemon water, please!

Nothing sets me back on track like heaps of vegetables and a few Nalgene’s of water, and maybe a multi-vitamin. My 7 mile  treadmill run yesterday couldn’t hurt either, right?

This egg bake is just the thing… it’s loaded with spinach and packs some serious protein. Top with some spicy sriracha to speed up your metabolism and you’ll be better in no time.

1 cup of frozen spinach, defrosted and excess water squeezed out with an old dish towel.

Preheat your oven to 350. Liberally grease a ramekin. Defrost spinach; I nuked mine in the microwave for about a minute and thirty seconds. Let the spinach cool slightly, Gather it in an old dish towel or some paper towels and wring it over the sink to squeeze out the excess water. Wash and chop your mushrooms into a small dice. Add the spinach and mushrooms to the ramekin and pour the egg whites over the top and top with freshly ground black pepper. Bake in the oven for about 25-30 minutes or until the eggs have set up and air firm. Finish with a minute under the broiler. Remove from the oven and to with your favorite condiment… mines sriracha!

How is it already December? Life seems to be in hyper drive. But December means it’s time to get festive! 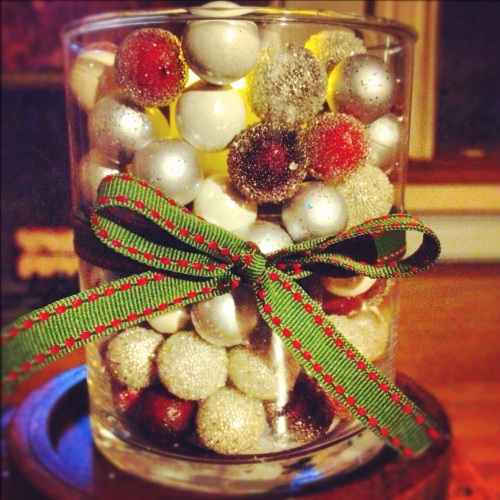 Sadly, no Christmas tree for us, but I do have my 88 cent poinsettia. Now, all we need is the snow!

I saw this recipe and it reminded me so much of my childhood around the holidays. Every year when I was little, my mom and I would make cranberry, orange, walnut bread for my teachers. Then we’d wrap it up in cellophane and tie it with a fancy bow and attach a home-made Christmas ornament.

I was a crafty kid.

Though the recipe is different, the flavors are the same.

Preheat your oven to 350. Grease a 9×5 inch loaf pan, and line it with a piece of parchment paper so that it hangs over the sides, for easy removal later. Grease the parchment paper and lightly sprinkle flour over the entire inside of the pan.

In a large bowl, combine the flour, sugar, baking powder, baking soda, and salt. Cube up the butter and mix it into the flour with your fingers until it is well incorporate. It should be a coarse meal.

In a medium size bowl combine the egg/ flax egg, orange juice, zest, vanilla. Add the wet ingredients to the dry ingredients all at once. Mix until just combined. Fold in the cranberries and almonds. Spoon the batter into the prepared loaf pan.

In a small bowl combine the flour, sugar, butter, cinnamon and almonds with your fingers. Once combined, sprinkle the mixture over the top of the loaf. Place in the center of your preheated oven and bake for 50 minutes to 1 hour.

Once a toothpick inserted in the center comes out clean, remove from the oven. Let cool in the pan for 15 minutes, then remove it from the pan, using the parchment handles and cool it on a wire rack.

To make the drizzle, whisk powdered sugar, cinnamon and almond milk in a small bowl. Drizzle over the top of the cooled loaf. Slice and enjoy.